After one of the Hardcore scene’s most highly anticipated returns to the stage, followed by a legendary set at the Black N’ Blue Bowl in May, we are beyond excited to have BURN back in New York City on Sunday, December 20th at Santos Party House with support from Baltimore’s MINDSET (final NYC appearance before disbanding), WISDOM IN CHAINS, KING NINE, THE WILDING INCIDENT (feat. members of Crown Of Thornz, Skarhead + Maximum Penalty) , REGULATE, ACTIVATOR and Staten Island’s newest addition IMPACT with DJ’ing by Sid Da Kid.

Presale tickets are available here with a limited amount being held at the door, day of the show.

To coincide with the release of a final EP, Mindset will perform a string of shows through the end of 2015 and into 2016. A handful of shows are already confirmed, with more in the works and details on their last show to be announced soon.

Tickets are available at; http://www.ticketweb.com/t3/sale/SaleEventDetail?dispatch=loadSelectionData&eventId=3917734&pl=santos

Flyer for the event with more information can be seen below. 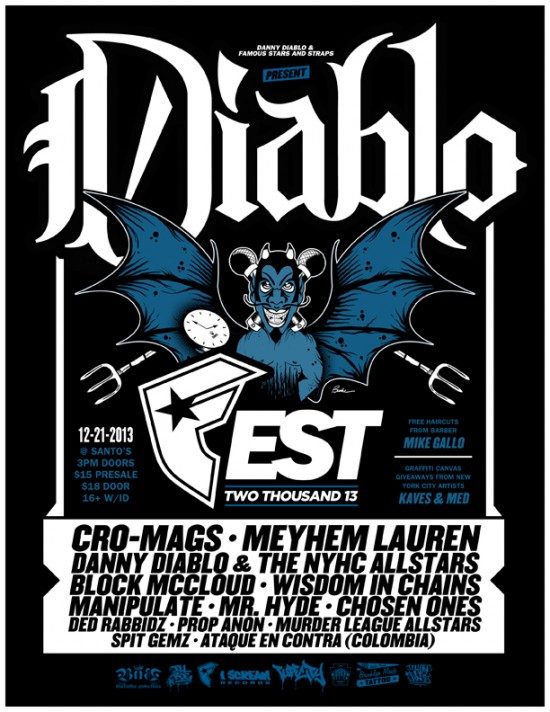 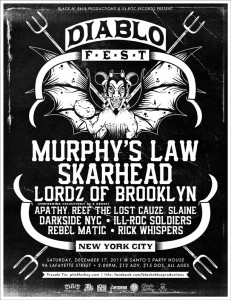 The first annual Diablo Fest (organized by none other than Lord Ezec, aka Danny Diablo himself) will take place December 17th at Santo’s Party House. The show will include and bring together some of the underground’s finest Hardcore and Hip Hop groups to date — Murphy’s Law, Skarhead, Lordz Of Brooklyn, Apathy, Reef The Lost Cauze & Slaine (perfoming collectively), Darkside NYC, ILL-Roc Soldiers, Rebel Matic and ILL-Roc’s most recent signing Rick Whispers. 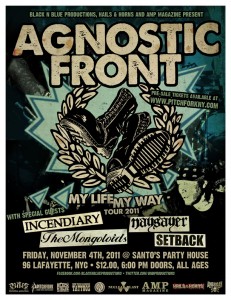 New York Hardcore legends and mainstays, Agnostic Front will be making their way through New York City on the My Life My Way Tour 2011 on November 4th with The Mongoloids and Naysayer in tow and Incendiary and Setback supporting. This show will be in the upstairs room at Santo’s Party House, $12, 6:00pm doors and it is an all ages event. Pre-sales tickets are available online through Pitchfork Hardwear.