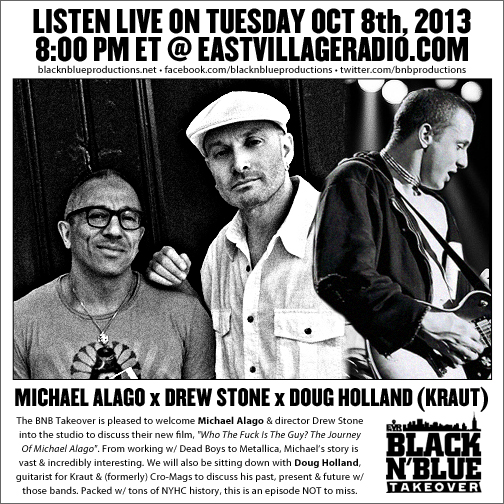 Michael Alago & director Drew Stone will be in the BNB Takeover studio discussing their new film “Who The Fuck Is The Guy? The Journey Of Michael Alago”. The film tells the story of Alago’s journey from humble roots in Brooklyn, into the netherworld of downtown New York’s music and arts scene in the 1970’s and 1980’s. Alago rose from running the Dead Boys fan club to becoming a live booker at the legendary Ritz nightclub and then onto a storied A&R career at Elektra Records & Geffen Records, where he signed Metallica, White Zombie, Flotsam and Jetsam & PiL. We will also be sitting down with Kraut and (former) Cro-Mags guitarist, Doug Holland to discuss his past, present and future with the aforementioned bands. An episode of incredible New York Hardcore history you will not want to miss.